This is a guide to our Twitch Channel Rewards, both the regular sort which you redeem using your Lemons (channel points). We've not included the channel point cost as that tends to vary over time!

All Hail the Lemon King! 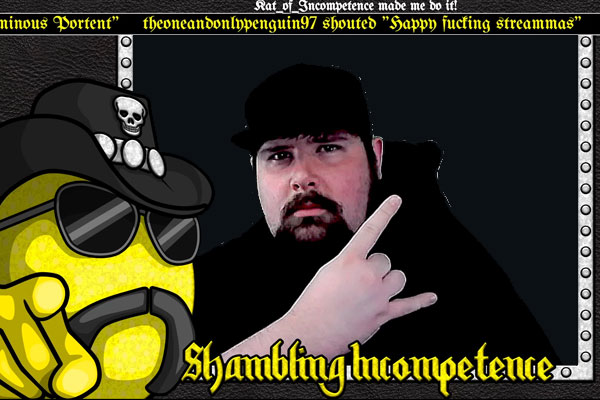 This is is a video slide reward which is available during standard game streams. Enjoy some Motorhead! Sadly minus the Lemon crown which died a miserable death. RIP Lemon Crown - you will be missed! 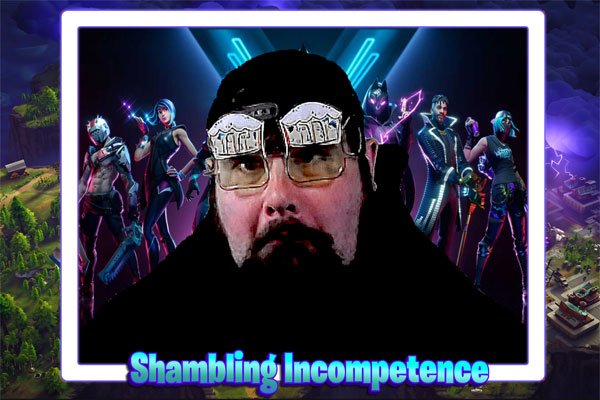 Shambo will impede his lacklustre gaming performance by wearing his Beer Goggles for 5 minutes. It's important to note this is done by putting on glasses, not by Shambo drinking beer... people redeem it too often for it to be beer! Also beer is expensive... gib money...

He turned himself into a banana chat! He's banana Shambo! Make Shambo wear the banana mask for 5 minutes. Only available during streams where the Green Screen is off 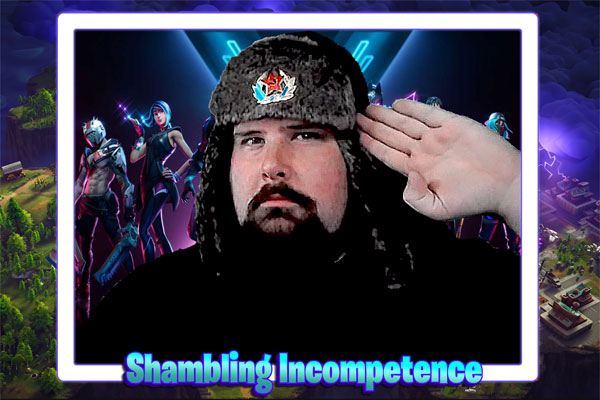 Shambo will wear his Ushanka for 5 minutes! May or may not include Shambo speaking in a dodgy Slavic accent... Side note, whilst Shambo has never been to Russia, the hat has! Not by itself obviously, that would be weird... 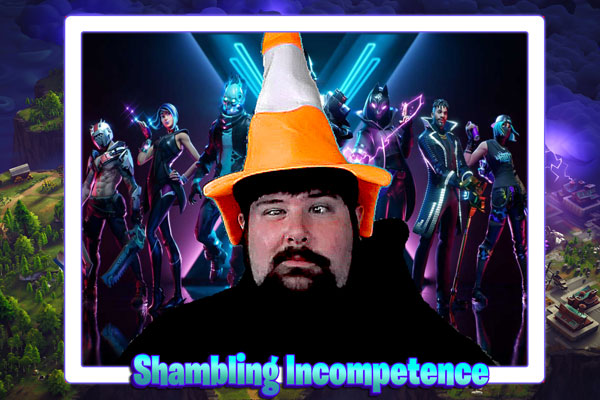 Shambo will don the Cone of Shame hat for 5 minutes - consider it punishment for various traffic offenses committed in Euro Truck Simulator 2 - although it can of course be redeemed any time! 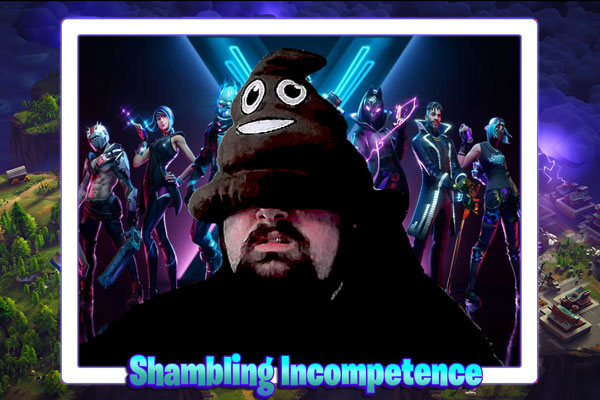 Shambo will wear the Poop hat for 5 minutes. To be clear it's a poop emoji hat made out of regular hat stuff and not in any way involving real poop, because that would be unsanitary! 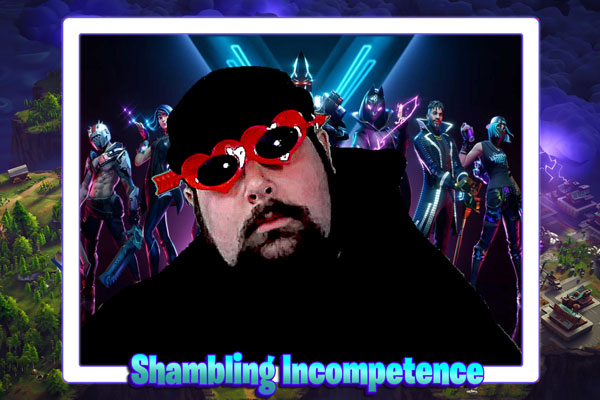 Shambo will stick on his totally love-tastic heart glasses for 5 minutes - just to remind you all how much he loves you, via the medium of a slightly mediocre visual gag!

I Will Always Love EU 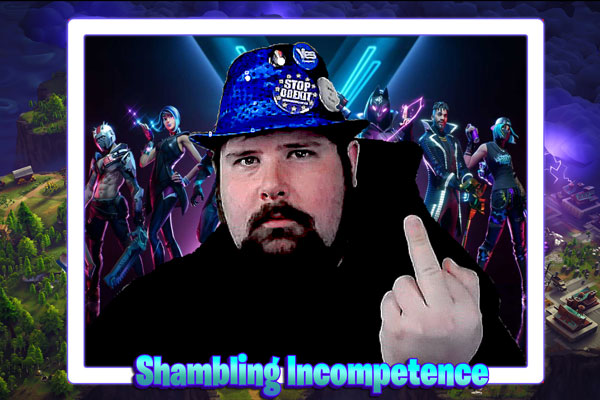 The House of Shambling Incompetence hates Brexit. Shambo will wear Kat's 'Bollocks to Brexit' hat (which has been with Kat on a number of anti-Brexit protests) for 5 minutes. This reward may or may not include Kat ranting on about how terrible Brexit is on stream as a bonus...

It is OUR Stream 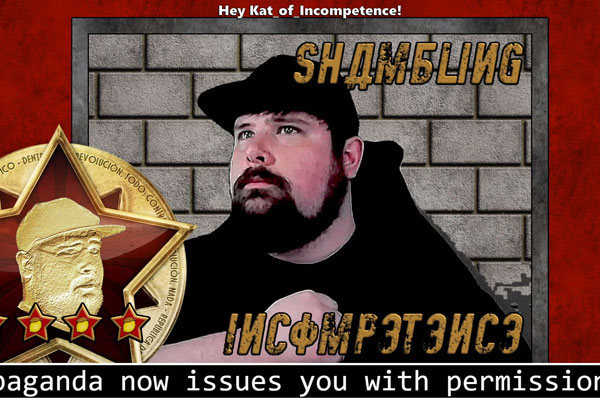 This is is a video slide reward which is available during standard game streams. In addition to much Communist Anthem it also features messages submitted by OUR community. If you'd like to submit a message to the selection shown on stream as part of this reward please see the companion reward below:

Make It Snow Number One!

Make it snow things on Stream for 2 minutes with this channel reward. It's not just for winter and you can choose from a multitude of things, not just snowflakes, by either typing in the ID number of a specific thing, or letting our web bot choose an item for you by leaving it blank 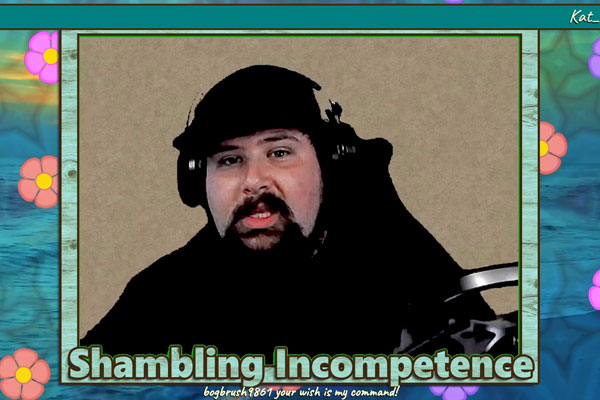 This is is a video slide reward which is available during standard game streams. Are you feeling stressed? In need of some inner peace? Shambo will offer some words of wisdom to soothe you in these troubled times. Well... ok maybe not wisdom and it may not be soothing... enjoy! 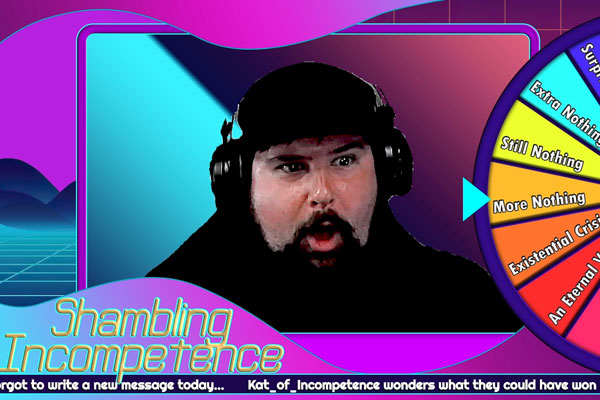 Have you ever wanted to win Nothing? Redeem this video slide reward and see what Nothing you have won! You also may win something... who knows, lets spin the wheel and find out! Good luck!

Don't like swearing or just enjoy watching Shambo suffer? This is the reward for you! Redeem it and Shambo has to try not to use naughty words for 15 minutes. If he fails before the timer ends, you get your channel points refunded! Good luck Mr.Potty-Mouth Incompetence, you're going to need it!

Question of the Day

What is the question of the day? It's not that, it's probably something else! Redeem the channel reward and Shambo will read out whatever nonsense has been selected for the current stream!

Every day is Pride Day here at Shambling Incompetence! Make Shambo wear his allyship on his head and look fabulous doing it with his favourite rainbow hat! Only available during streams when the Green Screen is off!

Shambo is the Special Bus

Shambo, All Aboard the Love Train 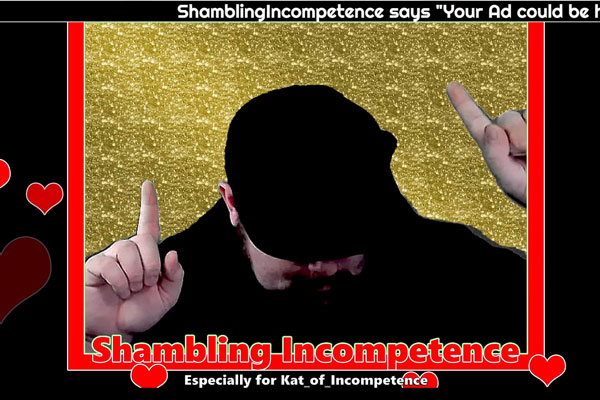 This is is a video slide reward which is available during standard game streams. People of the world, join hands! Share the love - in a socially distanced way. Also remember to wash your hands thoroughly afterwards...

Shambo, Give it a Name!

This reward is limited to certain streams where game characters or items can be named. Be sure to redeem this quick if you want to name a Pokemon or a Tank or anything else because otherwise Bogbrush will call it Dave. Everything at Shambling Incompetence is called Dave. Honestly we're surprised that Shambo hasn't been made to change his name to Dave by now...

Shambo, I Love You!

Redeeming this reward lets Shambo know how you really feel... It also spawns a little love heart on stream which grows the more times this reward is redeemed by different people, up to 10! 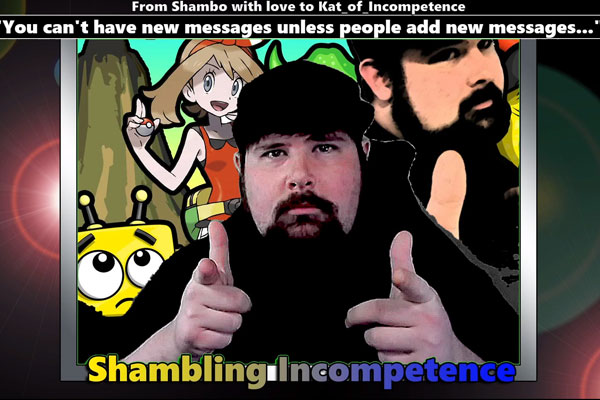 This is is a video slide reward which is available during standard game streams. And his name is... Shambo deadpanface. Yeah, he likes wrestling!

Update Shambo's on-stream green screen background with an image from our Move House library! There's loads of pictures to choose from, and 'random' is an option if you can't decide. Although if you can't find anything that you want to see him in front of then you could redeem the 'Add Your Photos to Shambo's Move House Locations' website reward for ♡500 reward credits per image.

Update Shambo's on-stream green screen background with any colour of your choice! This reward can set the colour to any hex code, or standard HTML colour (see the link below for a chart of supported colours - yes we may have tweaked a few that we disagreed with). You can also use random if you can't decide, overlay - if you want a background that goes with the on-stream overlay, or everyone's gayest favourite option, Super Unicorn! Which is literally all the colours! All at once!

Shambo, What IS Love? 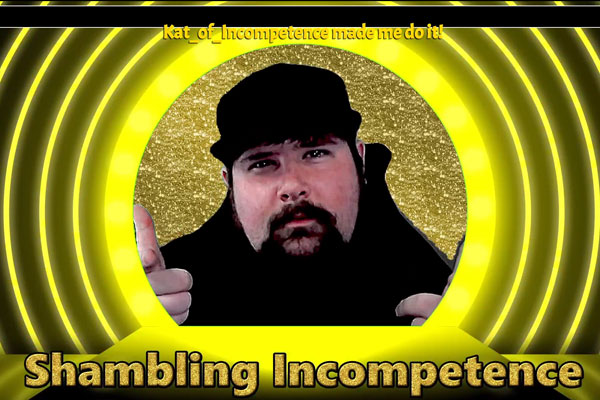 This is is a video slide reward which is available during standard game streams. Shambo asks the question 'What is Love?' via the medium of Hadaway! The answer to that question is up to you, but on Shambling Incompetence the answer is usually lemons... or shouting...

Every Pokemon Stream automatically spawns Pokemon for viewers to catch using this Channel Reward. For other streams you can unlock this Reward using the companion 'Activate Pokemon Lure' Channel Reward. Get better balls with Shambling Incompetence Reward credits, or possibly with the help of some manscaping, we don't know, we don't like to ask those kind of questions of our viewers...

Have you ever had the urge to throw a Lemon at Shambo? This reward functions much like on Stream Commands; type in Lemon into the Reward input and it will hit him in the face with a Lemon! Other things are also available to throw if you're a contributor and you have ♡25 Reward Credits! If you'd like a Thing which doesn't exist in our Library of Things, you can also redeem the 'Create a Thing to Throw at Shambo' website reward for ♡250 per item! 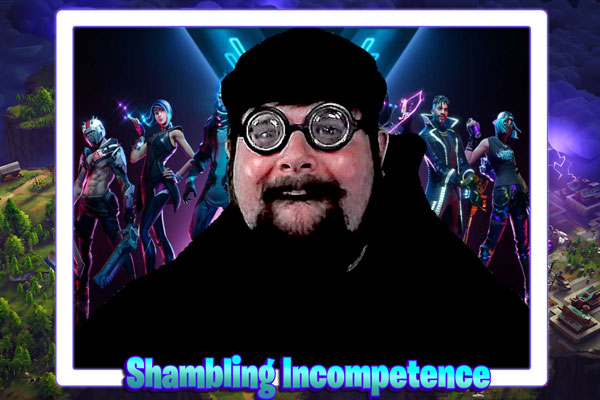 Shambo will put on his slightly larger glasses for 5 minutes. And then proceed to explain something very boring to you in great detail. Probably...

If you've ever wondered what a constipated whale sounds like then this is the reward for you. Does exactly what it says on the tin. Laugh you bastards, IT'S FUNNY!

What is it, Pumpkins? 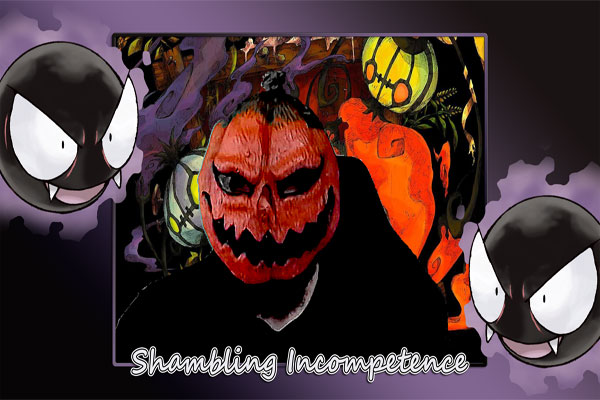 Boys and girls of every age, wouldn't you like to see something strange? I mean, you watch Shambo every day. Shambo will wear a pumpkin mask for five minutes!

Why the Long Face? 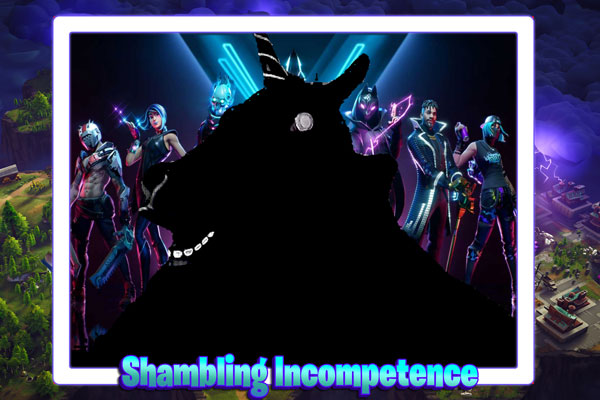 Shambo will wear the Hot Horse Mask for 5 minutes. It cannot be overstated how hot and uncomfortable this mask is so it's only available to request during the colder parts of the year! Want more incompetence? Redeem Horse mask today... or whenever it becomes available...

This is is a 'Highlight My Message' Reward with a difference. Not recommended if you want anyone to actually hear what your message says, but great if you like to hear things shouted at you death core style... It's not for everyone